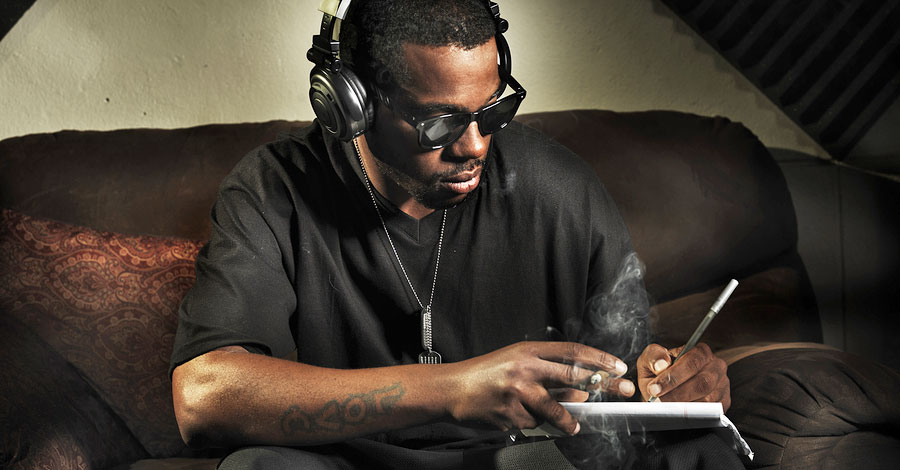 Gear up studio heads. Today we learn how to write great rap lyrics.

There isn’t any one answer, but great rap lyrics are usually comprised of a certain set of characteristics that make them great.

Typically, they show a mastery of many skills and creativity – things like clever word-play, imagery, wittiness, metaphors, quality content and so on. But most of all what makes them great is the emotional response they bring out in your listeners.

A good example of the emotional component that lies in all great lyrics can be seen from a song I wrote a year ago called “Scapegoat”. The song is about the chaos of life and feeling lost in the world with music being the only outlet to escape through.

It’s always interesting when I play this song for someone because his or her emotional response to it tells me so much about that person.

For example, about two months ago I had a female vocalist over my house and I played her this song. Halfway through it she busted out crying to the point where she had to excuse herself from the room and regain her composure.

Once she re-entered the room I asked her what was wrong. She immediately opened up and told me about all of the current problems she was going through and then it was easy to see how the lyrics of that song related to her life’s situation.

After she left, I had the chance to really sit down and think about it and the revelation that came to me was simple. This song was exactly what the name and lyrics said it was – a scapegoat for the pain she had bottled up inside. The lyrics triggered an emotional response that was so overwhelming she burst into tears. The connection between her and song was obvious and it was this connection that made these lyrics great.

Here are the lyrics to the chorus in that song:

Lost are the fun days and wild nights
So it’ll take another hundred years to get it right
But those days are just done and gone
And I can’t go back, so my best bets to getaway
Getaway and I sing my songs
And when I think about a warm touch it’s been so long
They all say I’ve got a lonely soul
And I think to myself – tell me somethin’ that I didn’t know

I chose to cover the emotional aspect of great lyrics first because I think it’s often overlooked, but lets take closer look at some of the other characteristics of great lyrics as well.

Wordplay is the clever use or manipulation of words in some fashion. Great rappers use wordplay to hold the listeners attention and to demonstrate their mastery as a wordsmith.

Lets look at this very short phrase as an example of ‘a play on words’.

If we disregard the vulgarity of the statement, for educational purposes, what we have is a double meaning on the word dick and clever word-play (usage) of the word addicted to bring attention to the line by playing off the word used in the double meaning..

Lyrics paint pictures even the blind can see.

Concise, vivid details are another component to great lyrics and they allow your listeners to create a visual representation of these lyrics in their mind. When writing rap lyrics always take into account the different elements of the surrounding environment.

Here’s an example of how effective imagery can be. This is me describing my surrounding environment last Saturday night.

If you had to guess, you would probably say I was at some sort of nightclub – and you would be correct.

How did you know I was at a club? You knew because I used words and phrases that described a club-like environment. In doing so, you were then able to create a mental picture of it and that mental picture should’ve looked something like a nightclub.

One component of imagery in writing that most people don’t even know exists is the way it actively engages the listener in their own personal experiences.

For instance, If I’m reading a passage from a book (with no pictures) and the passage is describing a big field of green grass down an old dirt road in Oklahoma – chances are I haven’t seen that actual field, but I have seen a similar field at some point in my life. So, what the brain will do when creating a mental picture of the described imagery is draw on the memories of times that I have come across similar fields of grass and it is those memories that will be used in conjunction with the written details to create this image.

When using imagery in your lyrics you are allowing your listener to create their own world based off the things you describe and the things in their past experiences they can relate to that description, which makes it an extremely powerful component to writing great lyrics.

Metaphors are very important in great lyric writing. To create a compelling metaphor you need to find a way to compare two unlike things in such a way that they appear to have something in common.

If I was a hardcore, street rapper and I was looking for a metaphor that creatively describes shooting someone, then I might say something like:

Now, lets break down the metaphor.

– Bullets are made of lead,
– Lead is a type of metal
– Robocop is covered in metal (particularly his chest)
– One of the main places to shoot someone is in the chest

You should start to see the commonalities that make this line a metaphor. Even though shooting someone and the metal on robocop’s chest are two completely different things we have cleverly made them appear to be related.

Metaphors show creativity and wit. The more creative and wittier your lyrics – the greater your lyrics are – It’s as simple as that.

A good example of a perfect rhyme is cool and school.

A good example of a similar rhyme is cool and to or cool and view.

The use of Similar rhymes is vital in rap lyrics because they give the rapper a lot more creative freedom to roam in their lyrical content.

Imagine if every time you wanted to rhyme something with the word cool the only rhyme choices you had were school, bull, pull, drool, and fool. This might be okay in the beginning but over time the creativity of your lyrical content would be severely limited and most likely redundant.

Filler lines are basically generic rhymes that are either used to keep the momentum going or to setup punch-lines. But they typically don’t have the “Wow” factor of a hard hitting punch-line.

Punch-lines are those prized lyrics that really grab your attention. They hit you dead in the chest and leave a lasting impression.

On the Battle Rap Circuit an amazing punch-line is referred to as a Quotable. Quotables are lines from your lyrics that people will remember for years after they hear it.

A good example of one of my favorite Quotables, came in a Rap Battle that happened about a year ago. It was Pat Stay VS. Hollahan. The two emcees were really going at it and then Pat dropped a Quotable out the gate that Hollahan couldn’t recover from.

“he sniffs coke thru the pen that he writes with,
So his lines are just a story on how pathetic his life is”

To fully understand the power of this punch-line you need to have some understanding of metaphors and knowledge on the history between the two rappers, but those bars completely changed the energy in the room and left everybody stunned.

The more haymaking punch-lines you can throw in your lyrics the better they will be! People will react more to your raps and you will get more respect from fellow rappers.

The Hook/chorus should embody the main focus of the song. Great hook lyrics are catchy, often repeated, and easy to remember. They should be clear, concise, and on point because the hook is the most important part of the song!

The Verse should support the lyrical content of the hook, but this is also the time when rappers get to display their lyrical skills and show off their mastery of rapping. This is when you hit your listeners with haymaking punch-lines and mind bending wordplay.

Try to always be conscious of your lyrical content. If you start rattling off a bunch of unrelated nonsense its harder for your listeners to follow along.

Writing well-structured lyrics is a vital step in learning how to rap. Using the tools mentioned above you are now armed with the knowledge to write great rap lyrics in any circumstance. Get to work and take your lyric writing to the next level and remember… rapping is all about what your saying and how you’re saying it.